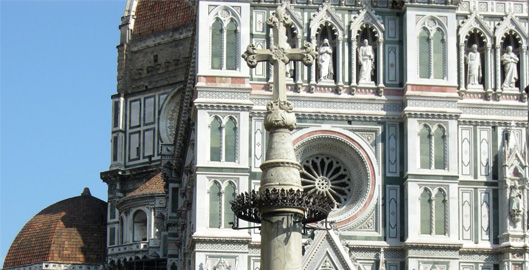 Next Saturday, January 26th, is the anniversary of a miracle happened -according to legend- in Florence in 429 A.D. and relating to one of the city’s most admire figures, the holy Bishop Zenobi.

On that day the bishop’s corpse was moved from S. Lorenzo (Florence’s old Cathedral) to the church of Santa Reparata, whise remains are now under S. Maria del Fiore.  Legand has it that during the procession, the corpse touched an bare elm-tree which immediately blossomed.  A column was erected on the spot to commemorate the event.

According to other sources, the body was moved not in 429 A.D. but towards the end of the 19th century.  The San Zenobi column which can be admired today bears an elm-tree twig and is not the original one which was destroyed during the 1333 Arno flood.

A San Zenobi walk will take you to some beautiful museums and landscapes starting from the column itself and moving into the Cathedral, where the spoils of the saint are still preserved, under altar.

The Museo dell’Opera del Duomo could be your next step, where the statues of the old cathedral façade are preserved among which the Virgin vith child between San Zenobi and Santa Reparata. The Saint is represented in two more works in the same museum: the Dossale di San Zenobi is also preserved in the museum, where Zenobi is represented in the centre sitting on a sumptuous desk and a terracotta lunette by Andrea Della Robbia.

Final step of this itinerary has to be Borgo Albizi, where San Zenobi is said to have worked on of  his miracles: the resurrection of the child of a noblewoman, described by Botticelli in his “History of San Zenobi” tables preserved between New York, London and Dresden.