The art of the table in Florence (2) 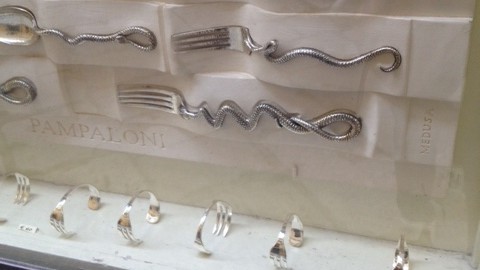 The second stop is few steps away from the Richard Ginori store: at 4r piazza Antinori, in front of the baroque façade of the Santi Michele e Gaetano church, you can find one of the entrances to the Loretta Caponi’s boutique.

Mrs Caponi, who was very well known for her beautiful embroideries, opened her first Florentine home linen store in 1967 and ever since she has been representing a reference point in that field. I especially stopped to admire the tablecloths and I had the chance to see many different kinds, all of them made with precious fabrics, embroidered and inlaid. Mrs Caponi provides tailor-made table cloths, in accordance with the colours of the customer’s home or of the dinner – service. For an elegant table I like the white tablecloths with white embroideries or with laces; on the other hand for a daily table I would choose a white tablecloth with coloured embroideries, to be combined with a simpler dinner-service.

I go on with my search for the cutlery: I walk down through via de’ Tornabuoni and, before reaching the Santa Trinita square, turn on the left in via di Porta Rossa. Here I met my match: at 99r there’s the Pampaloni store, whose windows let us see a part of  the large range of silver  cutlery that you can find inside. I’m really impressed by the originality of the products of this brand, not scared by the idea of using a traditional material, such as silver, to make new and bizarre stuff. Among the most strange things there’s a collection called Bichierografia, including cutlery as well as glass, bottle and dinner-sets. This collection was born after the graphic works of a Roman engraver and painter who lived between the end of the 16th century and the beginning of the 17th century. His name was Giovanni Maggi and he tried to interpret the  taste for the bizarre, typical of his time: he designed extravagant table services: forks, knives and spoons with snake-shaped handles, goblets with human leg-shaped feet, crystal glasses similar to complicate geometrical  compositions: I found them so spectacular! Having to choose the cutlery I would  be undecided between the Anglia or Troia collections, while I love the salt and pepper set from the Anakronistica collection. The owners of this brand have decided to lay the tables of their firm canteen with their own products; they have opened the canteen to the public as a restaurant in order to allow the common people to see how an elegant table set can make even the humblest and the most austere place an amazing dining room