In Guided tours in Florence

Looking for Michelangelo’s footmarks in Florence 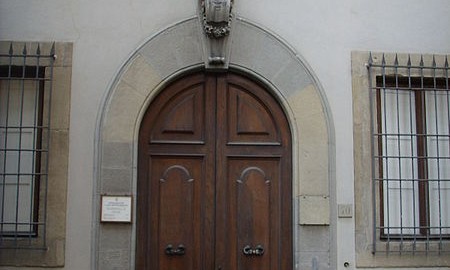 Last week it happened to have a very smart person who asked me to organize a Michelangelo tour in Florence lasting the whole day. Our tour started with the Accademia Gallery to see David, the Prisoners, Saint Matthew and the Pietà da Palestrina; it went on with the Medici chapels for the New Sacristy and the Bargello Museum housing Bacchus, Brutus, Apollon, and the Tondo Pitti. In the afternoon we planned to visit Santa Croce church for Michelangelo’s tomb and the Cathedral Museum to admire the moving Pietà Bandini. In the middle of this beautiful tour, we visited another building deeply linked to Michelangelo, where you can hardly find people: it’s the Buonarroti house.

To be honest since the beginning I have to tell that Michelangelo never lived in that house: that amazing building is the residence that he donated to his beloved nephew Leonardo. Michelangelo just purchased a group of houses and, when he wasn’t in Florence anymore, he commissioned the renovation works in order to make them a unique house, exactly the one that he left as a heritage to Leonardo. The house, as we see it now, is absolutely different from what Michelagelo saw and from the building that Leonardo inherited, because Leonardo’s son, Michelangelo the Younger, wanted it to be decorated by the most famous artists working in Florence in the first half of the 17th century. The decoration wasn’t meant to be just a way of beautifying the house, but moreover it was supposed to celebrate Michelangelo senior.

The heart of the project is the Gallery where you can follow Michelangelo’s artistic life thanks to the colourful images painted on the walls and on the ceiling: you will see him meeting the Medici family, popes and cardinals, receiving presents from his patrons. Nevertheless you won’t see there either all the troubles of his long life or the hard beginning of his carreer. But in the next rooms you will be allowed to admire, in the religious silence of an almost unknown place, the works he sculpted being a youg man, before going to Rome where he reached the fame with the Saint Peter Pietà. I’m speaking of the Madonna of the Stairs and of the Battle of the centaurs: both the works will make clear on one side the attention he had on Donatello’s works and on the other side the incredible life he was able to give to his figures. The next room houses other two works by him: the wooden model for the façade of San Lorenzo church and a preparatory statue representing a River God, designed to be part of the New Sacristy decoration but never made. Both these two works witness of Michelangelo’s difficult relationships with the Medici family (commissioners of both the works): the façade was prepared but never started and the New Sacristy was left unaccomplished at Michelagelo’s final departure from Florence to Rome. Looking at the River God, people can change their idea about Michelangelo: he was not only the artist who sculpted David with his perfect body, he was even the one who could represent the body of an old man, whose muscles, once strong and turgid, are progressively becoming relaxed hardly held by a wrinked skin