In Guided tours in Florence

Michelangelo’s Tondo Doni in the Uffizi Gallery of Florence 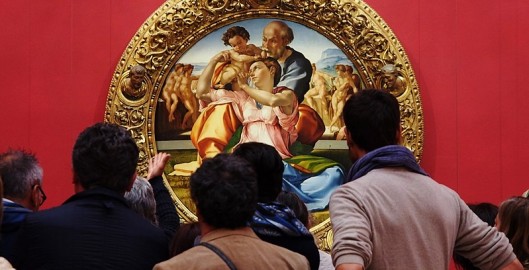 We are so used to think about Michelangelo as a universal artist that we remain speechless when we realize that there is just one painting in the world that can be for sure attributed to him
That painting is known as the Tondo Doni, it’s housed in the Uffizi Gallery in Florence and was painted at the very beginning of the 1500s.

Why has that painting such a peculiar name? The name Tondo Doni means that the painting is round-shaped (tondo) and that it was painted for a commissioner whose name was Agnolo Doni.
What’s the subject? The painting focuses on the Holy Family (saint Joseph, Mary and Jesus) represented in the foreground. Joseph and Mary are sitting on the grass and are lifting Jesus up. Behind them a gray line keeps them separate from the background, where some naked people are standing in or sitting on the edges of a sort of pool. In the same pool, but much closer to the Family, there’s a boy, wearing a fur and holding a bamboo stick. That boy is saint John the Baptist, Jesus’ cousin.
Is there any “secret” meaning hidden in this peculiar composition? Scholars have always tried to understand the reason why Michelangelo painted all those naked people in the background and, apparently, they found the solution. The nudes represent the pagans who are kept separate from the Holy Family because they are sinners; but their condition is not eternal: if they want, they can be baptised (this is why they are standing in the same pool as John the Baptist) and they will be able to share the same side of the painting as the Holy Family. John the Baptist, despite the uncentral position he has been given, is absolutely important in the painting, being the only bridge between the sinners and the saved ones.
Why did the commissioner choose this subject? The painting possibly was a gift that Agnolo Doni gave to his bride on the occasion of the birth of their first child and therefore the protection of the Holy Family seems particularly appropriate. Michelangelo did somenthing more: he decided that the Doni should be included in the painting, but, at the same time, he didn’t want to phisically represent them. In a very clever way he imagined them standing in front of the painting and looking at it: first of all, they are on the same side as the Holy Family, quite apart from the sinners; second, Mary’s very 3D elbow seems to go out of the painting and to invade the real space. In this way Michelangelo abolished any separation between the real world and the painting, in order to let the commissioners feel part of the painting.
Last but not least: this amazing painting still has its original wooden frame. The frame was personally designed by Michelangelo who gave the design to a specialised workshop to carve it in wood and to gild it. On top there’s a head forecoming, that’s Jesus, and two more on the right and on the left, being prophetic figures. Paying a bit more attention it’s possible to discover, hidden by the intertwined leaves and branches, the coat-of-arms of the Strozzi family (three crescent moons). This was one of the most famous families living in Florence in the past and the bride who received this painting from her husband was Maddalena Strozzi