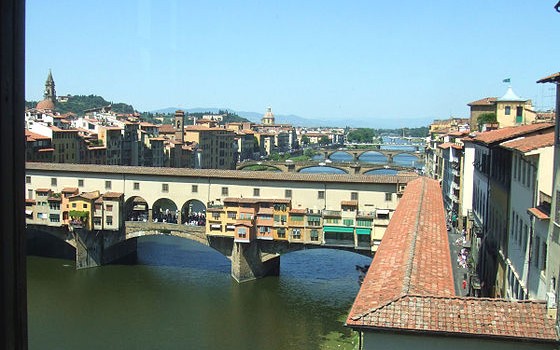 Today the corridor is an extension of the Uffizi and the Vasari corridor collections host many masterpieces from all over the world.

In the magnificent staircase leading into the corridor itself, and inside the first two rooms visitors can admire 17th century works by Caravaggio school painters among whom the most notable are Bartolomeo Manfredi and Gherardo delle Notti; remarkably among these paintings there are a few modern works remembering the terrible events of May 1993 when a car-bomb damaged the Uffizi and killed a whole family and a young student.

At the end of the staircase, a series of portraits leads into a vast collection of superb 17th and 18th century paintings in the section of the corridor running along the river Arno in Lungarno Archibusieri with works, among others, by Guercino, Claude Lorrain, Lorenzo Lippi.

After this stunning section, visitors can admire one of the world’s largest collections of self-portraits with over 600 pieces put together over four centuries which features some of the most important historical figures of the time.

Finally, the 20th century collection where Italian portraits are arranged on the right and foreign portraits on the left of the visitor; among these, Carlo Levi, Giorgio Morandi, De Chirico, Carrà, Guttuso, Ligabue, Marc Chagall, Siqueiros, Vasarely.
At the end a small room featuring sculptures or photographs with self-portraits by artists like Vanessa Beecroft, Robert Mapplethorpe and Patti Smith.

In conclusion, the Vasari corridor today showcases the changing of artistic taste through the centuries from the Medicis to contemporary artists and it is a unique way to gaze at Florence from an unusual point of view.