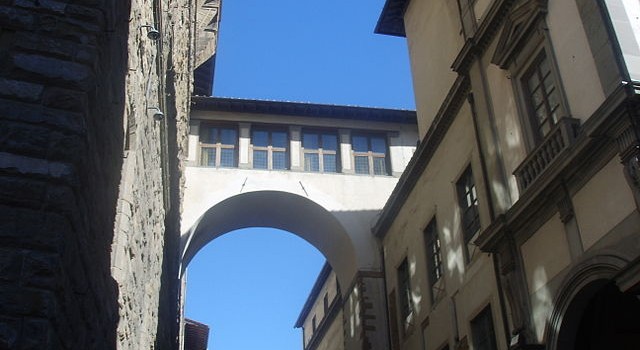 The Vasari corridor: a history.

The Vasari corridor has always had a formidable attraction on many tourists, due to its intriguing history and reputation as a place where inestimable treasures are kept.

The fact that most people believe it is a sort of secret inaccessible place only adds to its attraction. In fact this is a myth I want to dispel: the corridor can be regularly visited every year by booking and with a guide and since september 27th the last remaining section has been opened to host more paintings.

It is perhaps well to mention a brief history of this famous passage, to learn why it was built and, above all, why it is worth a visit.

The Vasari corridor was commissioned by Cosimo 1st Duke of Tuscany , of the Medici dinasty, and designed by the architect Giorgio Vasari. Building works started in March 1565 and lasted for six months; the corridor joins Palazzo Vecchio (the Town Hall, today) and Palazzo Pitti (link) over a distance of about 1 Km running inside some of Florence’s most memorable buildings and crossing the Arno over Ponte Vecchio, to end in the Boboli gardens. The inspiration for this building may have been a similar passage in Rome which was used by another member of the Medici family,  Pope Clement 7th to escape the troops of the Emperor Charles 5th when they ransacked Rome in 1527.

What was the Vasari corridor actually used for?

Inaugurated on occasion of the wedding between the Duke Regent Francesco 1st and Johanna, Princess of Austria, the corridor was mainly used as a convenient passage for members of the Medici family to move from one palace to the other without having to go out in the streets.

Things changed radically with the coming to the throne of Tuscany of the Grand Duke Ferdinando 1st in 1588. Ferdinando was a flamboyat ruler who loved to show his wealth and power; he had lived as a Cardinal among the grandeur of a Renaissance Vatican court and on returning to Florence as the new Monarch he wanted to change the uses of the Florentine court which he considered too austere. From then on the corridor was used as a place for the Medici rulers to entartain Royal guests as a show of their magnificence and wealth, to address the Florence people from one of the balconies or to watch Mass from the family booth inside the corridor opposite the church of Santa Felicita.

Under subsequent  Monarchs the corridor had alternate fortunes and was, sometimes, completely neglected with partos of it becoming daralict until 1853 when the Uffizi gallery was opened to the public and the corridor was revamped as a museum. The corridor has undergone a few modifications ever since but it has mainly remaind a museum up to these days.